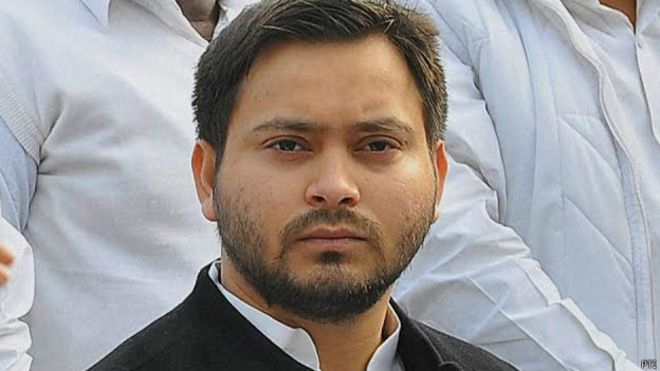 Patna: A day after the Janata Dal (United), or JDU, asked him to come clean, Bihar deputy chief minister Tejaswi Prasad Yadav on Wednesday virtually ruled out his resignation, while dubbing the FIR registered against him under various anti-corruption provisions as “political vendetta.”

“The FIR (in the land-for-hotels case) is part of a political vendetta. Bharatiya Janata Party (BJP) president Amit Shah and Prime Minister Narendra Modi are conspiring against me and family members out of political reasons,” Yadav told reporters after coming out of a cabinet meeting.

He said “everybody knows that they (BJP) are afraid of Laluji. But, it was not known that they are afraid of even a youth of 28 years of age. Can you believe that a child of 14 years of age whose moustache has even not grown will indulge in corruption?” he said, dubbing the FIR as farzi (fake).

The FIR was lodged in connection with a private party allegedly giving three acres of land in 2004 in Patna to them in return of getting licence to run two IRCTC hotels at Ranchi and Puri when Lalu Prasad was the railway minister.

Highlighting his good work and clean image as minister, Prasad said: “From the first day I entered office, I have been adhering to zero tolerance to corruption and has not done anything wrong in dispensing the responsibility. When a man at age 28 is not indulging in any corruption, how can he indulge in corrupt practises at an age of 14.”

Yadav said the BJP was after him because he had highlighted the prime minister’s “broken promises” to youths, farmers and workers and asserted that the Rashtriya Janata Dal (RJD) would not rest till they ousted the saffron party not only from Bihar but from the entire country. “We’ll go to the people of Bihar and tell them everything.”

“The Grand Alliance is intact and will continue to run,” said Yadav, who is also the leader of 80-member RJD legislature party.

He vented anger on a section of media and called them goonda (thugs) who “on tune of BJP” was out to break the Grand Alliance government in Bihar.

While Yadav was speaking to media persons at the state secretariat, his health minister and brother Tej Pratap Yadav was standing behind him. In the cabinet meeting, Yadav met chief minister Nitish Kumar for the first time after his party in a terse message to him on Tuesday had asked to “come out with facts in public against the accusations”.

On Tuesday, after a prolonged meeting chaired by Nitish Kumar, the JDU had delivered a tough message to Yadav to “come clean on accusations by explaining with facts against charges,” but had stopped short of demanding his resignation.

The message had come amid signal of widening rift between the JDU and the RJD and through which JDU made it clear that it could in no case make any compromise with Nitish Kumar’s clean image.

Meanwhile, a group of people claiming themselves as member of Krishna Sena squatted on the rail tracks at Hajipur protesting the registration of the FIR against Yadav.

“The agitators protested from 11.15am to 11.50am at Hajipur station. They were removed by Railway Protection Force (RPF) personnel,” East Central Railway (ECR) spokesman Rajesh Kumar said. He said movement of two trains was effected due to the agitation for a brief period.