SP, BSP announce tie-up for Lok Sabha polls sans Congress, to contest 38 seats each in UP 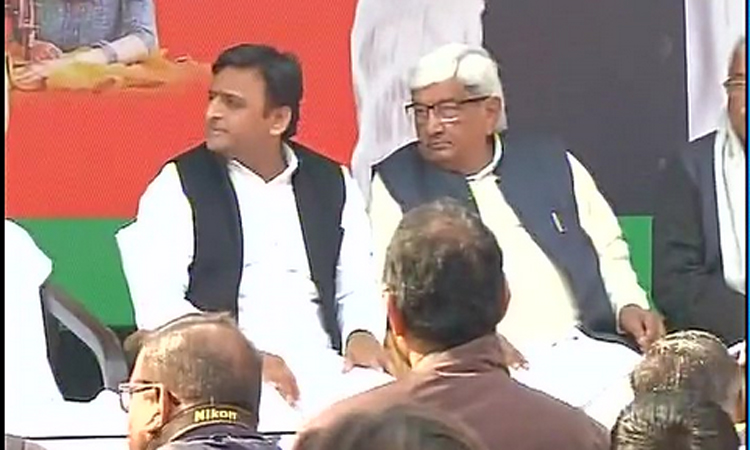 Lucknow: Once-arch rivals Samajwadi Party (SP) and Bahujan Samaj Party (BSP) announced Saturday their tie-up in Uttar Pradesh for the 2019 Lok Sabha polls, sharing 38 seats each and keeping the Congress out of the alliance.

The parties, however, said they would not field candidates in Amethi and Rae Bareli, represented by Congress president Rahul Gandhi and UPA chairperson Sonia Gandhi. They also left two seats, out of 80, for smaller allies.

Making the announcement at a joint press conference with SP president Akhilesh Yadav here, BSP chief Mayawati said, "This...will rob 'guru-chela' -- Prime Minister Narendra Modi and BJP president Amit Shah -- of their sleep." "I have full confidence that just as our alliance defeated the BJP in the Lok Sabha bypolls, we will crush the saffron party in the general elections," she said, referring to the BJP's defeat in Phulpur, Gorakhpur and Kairana parliamentary bypolls.

Reacting to the development, the Bharatiya Janata Party (BJP) said the SP and the BSP came together for their survival, and not for the country or Uttar Pradesh, and  downplayed suggestions that the alliance would have a major impact on the upcoming Lok Sabha polls.

"The SP and the BSP have allied neither for the country nor for Uttar Pradesh, but for their survival. They know they cannot fight (Prime Minister Narendra) Modi on their own and their opposition to him is the sole base for their alliance," senior BJP leader and Union minister Ravi Shankar Prasad told reporters on the sidelines of the party's ongoing National Council Meeting in Delhi.

In 2014, the BJP had won 71 seats in Uttar Pradesh while its ally Apna Dal bagged two. The Samajwadi Party won five seats and the Congress two, while the BSP drew a blank.

Explaining why the Congress was not included in the alliance, Mayawati said that during the Congress rule over the years, poverty, unemployment and corruption grew in the country and there had been scams in various defence deals.

She also said that in case of a tie-up with the Congress in the past, the party did not gain.

"In the past I have seen that our votes get transferred to the Congress, but not vice-versa. We do not gain from alliance with Congress, whereas vote transfer is perfect in SP-BSP tie-up," Mayawati said.

Drawing a parallel between the BJP and the Congress, Mayawati said the Congress had imposed the Emergency while the BJP is responsible for an undeclared Emergency.

The joint press conference was held at a posh hotel here after top leadership of both the parties had met in New Delhi recently to discuss broad parameters of the alliance to take on the BJP unitedly in the Lok Sabha elections.

To a question on seat-sharing with the Rashtriya Lok Dal (RLD) in western UP, Akhilesh Yadav said the media would be informed about it in due course.

On whether it was a "natural alliance", Mayawati said, "Yeh lamba chaleyga, aagey bhi chaleyga, Lok Sabha chunav ke baad, UP Assembly mein bhi yeh sthayee chalega (This will last long, even beyond LS polls and in UP Assembly elections).

To a question as to whether Mayawati could be the possible prime minister face of the alliance, Akhilesh said, "UP has given PM a number of times in the past and once again the next PM will be from UP." He did not, however, elaborate.

On whether Mayawati and Akhilesh Yadav will be contesting the Lok Sabha polls, both of them said the media will come to know in due course of time.

Mayawati also charged the BJP with spending massive money on Shivpal Yadav, who has recently floated the Pragatisheel Samajwadi Party-Lohia (to split non-BJP votes) and said, "The money will go down the drains." On the BJP seeking to drive a wedge between the SP and the BSP by frequently citing the infamous Lucknow guest house incident in 1995 when the BSP leader was targeted by SP supporters and goons, she said, "We have decided to prioritise national interest putting the incident to the back-burner so that the BJP is not able to form the government this time." West Bengal Chief Minister Mamata Banerjee welcomed the SP-BSP announcing an alliance in Uttar Pradesh.

"I welcome the alliance of the SP and the BSP for the forthcoming Lok Sabha elections," Banerjee tweeted.

The Trinamool Congress supremo, who has been a vociferous critique of the BJP, has been touring the country over the past one year trying to build an opposition alliance to take on the BJP in the upcoming Lok Sabha elections.