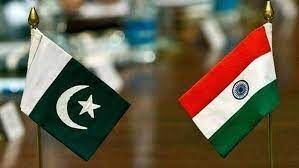 The willingness comes without a rider for the settlement of the Kashmir issue, provided a headway in bilateral talks, reports say.

Both peace with neighbours and economic diplomacy are going to be the central theme of the Pakistan's foreign policy, according to the Express Tribune newspaper.

The five-year-policy document for 2022-26, which is the country's first-ever strategy paper of its kind, spells out the national security vision and guidelines for the attainment of those goals.

An official reportedly said that the original 100-page policy could open the door for trade and business ties with India sans the final settlement of Kashmir dispute.

"We are not seeking hostility with India for the next 100 years. The new policy seeks peace with immediate neighbours," an official said on condition of anonymity.

The official added that there would be possibility for normalising trade and commercial ties with India as in the past, if there is a dialogue.

Ties between India and Pakistan strained following the terror strike by Pakistan-based terror groups on Pathankot Air Force in 2016; subsequent attacks, including one on Indian Army camp in Uri worsened the situation.

When India withdrew special powers to Jammu and Kashmir as well as bifurcating the state into union territories in 2019, relations between two nations nose-dived further.

India has told Pakistan that it desires normal neighbourly relations with Islamabad in an environment free of terror, hostility and violence, PTI reported.

"But geo-economics does not necessarily mean we overlook our geo-strategic and geo-political interests," the official said, adding the long-standing Kashmir dispute with India has been identified as a 'vital national policy' issue for Pakistan.

The official found no prospects of rapprochement with India under the current government in New Delhi.

"Only a part of the national security policy will be made public," the official clarified, saying in the rest of the world such policies often remained classified.

In spite of having its defence, foreign and internal policies, the new policy according to the official, will act as an "umbrella document", providing direction to the future.

It took seven years to prepare this policy, which was started by then-national security adviser Sartaj Aziz in 2014.

However, the Opposition had boycotted the session when National Security Adviser Moeed Yusuf briefed the parliamentary committee on national security a few weeks ago.

The policy will be reviewed every year and at the time of change of government, the official said, adding the issue of political stability was also taken care of in it, PTI reported.

Pakistan has a chequered history with no elected prime minister having ever been able to complete his/her five-year term. The new policy also deals with the issue of militant and dissident groups and advocates dialogue with 'reconcilable elements.'