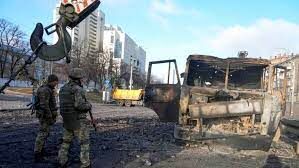 Reports from warfront say that two large explosions were heard as Russian forces surged further in Ukraine's capital on Sunday.

Ukraine's interior minister and other officials reportedly said of Russian troops in Kharkiv.

The latest feeds say that Ukraine President, though expressed willingness to talk, was against Russia's choice of Belarus as venue.

Russian troops began moving to streets of many Ukrainian cities.

Asking to further their invasion, the Russian Ministry of Defence ordered its troops to resume their offensive "in all directions".

There were reports of Russian forces being frustrated over the slow movement of forces in the capital Kyiv. Ukrainian army was putting stiff resistance to Russian forces.

This comes after Ukraine's outgunned forces held the capital for the third day on Saturday as the war continued across the country.

At some point, Ukrainian President Volodymyr Zelensky urged citizens to defend the nation.

Reports said the president himself refused to leave Kyiv.

The multi-pronged attack unleashed by Russian forces in Ukrane targeted airfields and fuels facilities, according to AP.

Deafening explosions lit up the sky early Sunday in the capital Kyiv. One report by new agency AP said of people hunkering down in homes, underground and subway stations.

Meanwhile, AFP reported of a Russian delegation arriving in Belarus for talks with Ukraine.